A second load of laundry is on the line after emptying suitcases last night.  I had unpacked slowly, thinking about the four-day gathering with Friends (Quakers) we had just returned from. This year’s North Pacific Yearly Meeting at the University of Puget Sound focused on racism and featured Vanessa Julye , the coordinator of the Ministry on Racism at Friends General Conference.

Vanessa has written extensively about her journey toward eliminating racism in the Religious Society of Friends. In this short video from QuakerSpeak, she talks about Quakers and Racism.

Vanessa is also co-author, with Donna McDaniel, of Fit for Freedom, Not for Justice: Quakers, African Americans, and the Myth of Racial Justice. 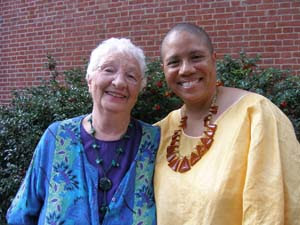 I’m still digesting all that Vanessa presented and that we all shared with each other in response to this query:

How can we European-American Quakers go further in standing with all people of color and in sharing the power that has been part of white privilege?

Conversations about the ways European-Americans have benefited from white privilege and white supremacy were tough for me. I need to consider what I heard and to take a close look at how I’m complicit in racism. In the coming weeks, I’ll strive to take more steps to stand with people of color.

You know a friend gets you when she snaps a photo of a sign in a window and texts it to you. Another one for my handwashing collection. Thanks @fallonpat.
Such a treat to watch @kipgreenthal sign books pre-ordered from @lopezbookshop. They’re all ready for the October 12 release date! Until then, you just have to trust me that Shoal Water is a gorgeous novel by a gifted writer, published by @homebound.publications. I’ve heard Kip will be at Lopez Bookshop the afternoon of 10/12 if you want to stop in to buy a copy and congratulate her. Thanks to bookseller Sarah Munson for the heavy lifting and enthusiasm!
Today is @orange_shirt_day. If, like me, you still have much to learn about the devastation of residential schools for First Nations and Indigenous people, visit my last-day-of-the-month blog post for resources on this journey. irisgraville.com
Good morning, Leavenworth!