*Afterthought 100—They All Have Names

For the past few weeks, a small group of people has gathered in Lopez Island’s tiny village on Sunday afternoons. Most have carried signs protesting police brutality, racism, and white supremacy. Recently, organizers called for help to paint signs with the names of Black, Indigenous, and People of Color (BIPOC) around the U.S. who have been killed by law enforcement officers.

This installation has been growing along a road at the Village entrance. Sadly, a local woman who opposes Black Lives Matter, pulled up the stakes and threw the signs to the ground. After organizers repaired and replaced the signs, she and her husband defaced them with black spray paint and allegedly turned the spray cans of paint on some of the organizers.

The community’s response? Repaint the existing signs, add more, and install the growing number and adorn them with fresh, local flowers. 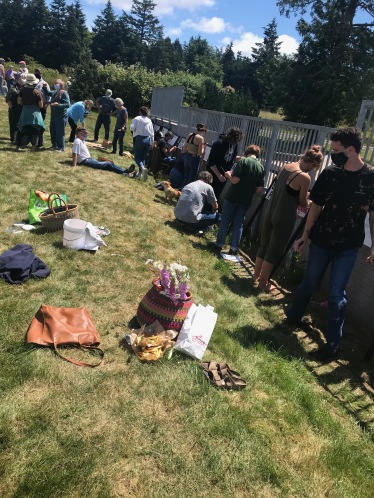 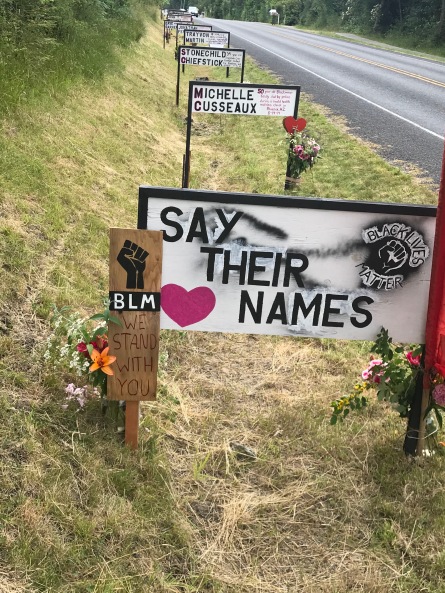 A friend shared the list of names and information written on the signs. There are so many more names—of people gunned down by heavily-armed police. May we remember and honor their names and their lives.

17-year-old Black high school student; played football, was good at working on bikes, and wanted to be a pilot. Killed while walking through a neighborhood in Sanford, FL

20-year-old Black man; made his living as a rapper. Killed by six police officers in Vallejo, CA, who shot 55 rounds in the space of 4 seconds.

31-year-old Black man. He was a loving son and brother who suffered from schizophrenia. Killed by Milwaukee, WI police. They were called because he was sleeping on a park bench.

33-year-old Black man. He was a father and a talented musician who played drums in his church. Killed by Tacoma, WA police. His last words were, “I can’t breathe.” 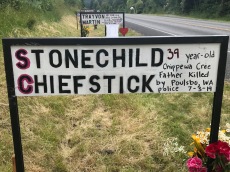 39-year-old Chippewa Cree man and father and a community member of the Suquamish Tribe. Killed in a crowded park by Poulsbo, WA police. He was carrying a screwdriver.

25-year-old Black, transgender woman. She was a loving aunt who worked as a home health aide. Murdered in Liberty Township, OH.

38-year-old Black, transgender man. Friends gave him the nickname “Tony the Tiger.” He lived with energy and a big heart. Killed by Tallahassee, FL police

Rayshard Brooks – 6-12-20, the night before his daughter’s 8th birthday celebration

27-year-old Black man and father. A hard worker, loyal. Killed by Atlanta police officers in an altercation and after 30 minutes of talking peacefully with them. 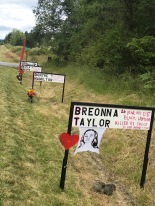 26-year-old Black woman, EMT. She loved to make a difference in people’s lives. Killed by Louisville, KY police on a no-knock search warrant. She was sleeping in her bed.

27-year-old Black man and father, known as a “gentle giant.” Unarmed, killed by NYPD. Said “I can’t breathe” 11 times while in a chokehold and pinned down by officers.

15-year-old Black girl and a high school student. Attacked and murdered in Los Angeles, CA by a corner store owner over a $2 orange juice she intended to pay for.

50-year-old Nuu-chah-nulth man; a seventh-generation woodcarver. He had a hearing impairment. Killed by a Seattle police officer as he was crossing the street and didn’t hear the order to drop his carving knife

12-year-old Black boy shot by police while playing in a park in Cleveland, OH.

37-year-old Black man and father. Loved to cook — and enough to share with everybody. Killed by Baton Rouge, LA police officers while pinned down and immobilized.

Seven-year-old Black girl, sleeping on the couch next to her grandmother. Killed by Detroit SWAT team in a raid on the wrong apartment. The raid was being filmed for a 48-hour detective challenge TV program.

22-year-old Black woman. Remembered for her smile and “the way her presence always lifted the room with joy and love.” Murdered amongst her friends by an off-duty Chicago police detective.

A 24-year-old Black, former football player, shot 12 times and killed by Charlotte police after he went in search of help after a car accident.

A 25-year-old Black man shot and killed while jogging in Brunswick, GA by a former policeman and his son.

54-year-old Black man shot in South Bend, IN. Officer never turned on his body cam and was never charged.

66-year-old Black, disabled grandmother shot by New York police during an eviction. Housing officials decided to forcefully evict her with police before hospitalizing her for mental and physical disabilities. Mother of 7. Grandmother of 10.

27-year-old Black, trans woman who was killed by police. A sex worker in Baltimore, MD. Consistently misgendered and misnamed by media after her killing.

33-year-old Black man beaten by police. Died from injuries from the hands of the police officers trying to arrest him. A successful salesman and former Marine. His death incited the Miami riots of 1980.

41-year-old Black trans woman killed by 6 Berkley, CA police officers responding to a mental health call made by her friend. An auntie who loved her baby niece. Described as a punk rocker babe by her closest friends.

May they rest in power.

*Afterthoughts are my blog version of a practice followed in some Quaker meetings. After meeting for worship ends, people continue in silence for a few more minutes during which they’re invited to share thoughts or reflect on the morning’s worship. I’ve adopted the form here for last-day-of-the-month brief reflections on headlines, quotes, books, previous posts, maybe even bumper stickers and refrigerator magnets.

Always a thrill to receive a good review. This one arrived 3 years after Hiking Naked was launched! Thanks @reviewthisreviews. Also helps to have the appropriate beverage to celebrate the 4th anniversary of the book. Haven’t read it yet? It’s available wherever books are sold. I’m looking forward to reviewing a bunch of new books coming out soon. Read about them in today’s blog at irisgraville.com.
Here’s what I was getting ready for 4 years ago. Right before the baptism and the Senior Lunch, I launched #hikingnaked on #lopezisland. So many fond memories of the book’s warm reception by my community. Thanks @homebound.publications for keeping the memoir in print and @lopezbookshop for keeping it on the shelves. Still available wherever books are sold.
Celebration! @kipgreenthal and I toasted @spiralleadership last night at @vitaswildlydelicious in honor of Ab's selection as a finalist in the @homebound.publications 2021 Poetry Contest! That means Ab's collection, "Walk Deep," will be published by the press next year. I'm looking forward to reading Ab's book as well as that of the Poetry Prize winner, @samdva. Yep, we closed the place down! Thanks for letting us stick around, @bruce.botts.
You may not have noticed the surprise I hid in yesterday’s blog post, “Sharing Stories During Dark Times.” If you click on the hyperlinks I often include in my essays, the one in the third paragraph would have led you to an important announcement about my forthcoming book, Writer in a Life Vest.