Rain is in the forecast today and for every day but three of the next eleven. Such predictions aren’t all that unusual at this time of year where I live in the upper left corner of the United States. But twenty-two years ago at this time, I lived a bit east of here on the Stehekin River in Washington’s North Cascades, where most of the winter precipitation is in the form of snow. As I write in my new memoir, Hiking Naked: A Quaker Woman’s Search for Balance, the Stehekin River was a powerful teacher for me during the two years my husband Jerry, our children Rachel and Matt, and I lived on its banks, along with eighty other people who treasure—and respect—the beauty and the power of the valley.

That year, 1995, snow came to the valley floor in early November, followed by warmer temperatures and then days and days of heavy rain. Rocks and boulders in the summer-dried riverbed disappeared as the river swelled. What had been a tranquil trickle of flowing water just days before was now a roar we could hear whenever we opened the house door. As we prepared for Thanksgiving, we kept close watch on the river inching up its banks. 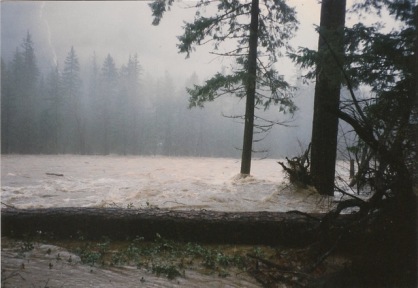 Now, the river that usually serenaded me with its quiet, soothing flow, echoed the sounds of tumbling boulders and the splash of hundred-foot tall cedars and pines, their roots torn from the banks by the pressure of the current. Late one afternoon midweek, the river exploded over the bank at the end of Company Creek Road, and gushed through the foundation of the Avery cabin just beyond our house.

As full-sized cedars rumbled past, I wondered how one of my favorite trees was faring. Early in our relocation to Stehekin, I spotted it just beyond Harlequin Bridge and called it my “lean into it” tree. The cedar stretched its lower third over the riverbank before curving the rest of its height gracefully up toward the sky. Five roots, as thick as a grown man’s thighs, sprawled from the tree’s stringy-barked trunk and clawed into the soil. Half-a-dozen branches reached out across the river as if in a tug-of-war with the roots to keep the cedar upright and anchored. Could it survive the thrashing water now gnawing at the banks of the Stehekin?

“Hey guys,” Rachel said as we sat down to dinner, “it’s stopped raining.”

“I wouldn’t get too excited yet,” Jerry said. “The river is so full we’ll need lots of days without rain to make a difference.”

That wouldn’t happen for a while, as the rain returned during the night.

The next morning, Jerry, the kids and I ventured out in the gray, walking down Company Creek Road to see the effects of the night’s deluge. After about half a mile, we could go no further. Water had burst over the embankment.

I shuffled back a few feet from the raw river edge, keeping my eyes on the new arm of the Stehekin surging down the middle of Company Creek Road. The same road that wound from our house for four miles beside the Stehekin, then across Harlequin Bridge to connect us to the five miles of paved road leading to the ferry landing, the head of Lake Chelan, and the rest of the world. Now, this link had been split by a torrent of mud-brown, churning water, so deep I couldn’t see the rock roadbed that surely lay underneath. Cut off from friends, neighbors, the school, mail, and groceries, I huddled with Jerry and the kids, all of us staring at the galloping currents.

The power of this force humbled me. How many times had that river flooded, reminding the residents of its valley we had intruded on its home?  We might think we know best where roads should go or houses should be built, but the river follows its own wisdom, has its own idea about its course, and thus ours. I had come to Stehekin to wrestle with both my need for control as well as the ways I’d disengaged from the world to protect myself from urban overload and work stress. The flood’s fury reconnected me to the earth. The water frothing between the banks carried the rains, the melted snows, the ancient glacial melt that forced the Stehekin to escape its borders and eat away at the bend in the road. Now a big chunk of road joined this flow of history, mingled with old and new waters, mixed with boulders and pines that rushed down the swollen river, to the head of the lake, bound to get to Chelan, the Columbia, and the sea before I would. While the Stehekin raged a record 19,000 cubic square feet of water every minute, there was nothing for us to do but wait, stranded at our end of Company Creek Road.

Along with the boulders and trees, the river washed away power poles and lines, leaving us without electricity during the flood’s climax. Fortunately, we had heeded the wisdom of our neighbors and filled our bathtub with water in anticipation of the loss of our electric pump for the well. We had plenty of firewood for the barrel stove that warmed the house. A full tank of propane fueled our cooking stove to heat the food we kept cold in an ice chest on the front porch. Our days were filled with basic survival chores as well as monitoring the river’s course, so it didn’t matter that the sun disappeared around four in the afternoon. After dinner preparation, cleanup, and a little reading by the light of candles and kerosene lamps, we were all ready for sleep.

Three days after the road disappeared, the water receded enough for a neighbor to drive his bulldozer into the woods beyond the washout to punch out a temporary road between the trees. Now crews could get in to replace the missing power poles and string new lines to restore electricity. Life began to return to normal.

When we received permission to drive across the temporary road, my family and I enthusiastically piled into our 1973 Suburban. Jerry drove slower than usual down the narrow, winding road, not knowing what hazards from the river’s rampage might stop us. Its surge had created gullies, cleaned out fall debris, and scattered firewood, toys, barrels, shovels, rakes, and ladders far from their homes.

We had heard that the approaches to Harlequin Bridge had taken a beating. I held my breath as we neared the bend just before it. The sky was blue, but the coffee and cream-colored river bubbling past like soup at a hard boil still taunted both sides of the road and the bridge’s underside. My eyes focused to the left, just beyond the bridge’s span, to the bank across from us. Still “leanin’ into it,” my cedar clung to the river’s edge, reaching toward the sun while remaining firmly rooted in the rock and soil of home. I let out my breath and leaned a bit more into life’s requirement to both hold on and let go.