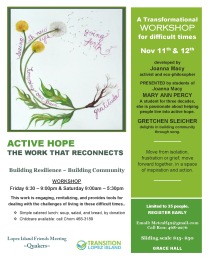 After a sleepless night following the 2016 presidential election, I awoke the next morning with many questions: How? Why? What will happen? A few days later, I carried one with me to a workshop about active hope. That question was directed at me: What am I to do?

In January, I continued to grapple with the question in the online course We Were Made for This Moment, taught by Quaker teacher, writer, and activist Eileen Flanagan. In the company of 100 other participants, and with Eileen’s knowledge and skills with social change, clarity, and empowerment, I felt strengthened and heartened to discern and offer the skills and gifts we have to offer.

For me, that discernment took some time.

As I tried to remain open to direction about how to respond to the election of Donald Trump, I tested out a few actions. In the first three months of 2017, I sent more letters, postcards, and emails to state and federal representatives than I had in the previous, oh, twenty years. For the first time in decades, I lobbied state legislators and rallied at the state capitol for the Salish Sea, the water that surrounds my home and is threatened by increased oil transport between the U.S. and Canada.

I watched and listened to the ways the election energized people all over the country to speak out and become more politically involved. Some responded to the election results by urging people (particularly women) to run for office. Two such efforts that offer support and direction are She Should Run and Emily’s List.

According to a Feb. 9, 2017 article in New York Magazine, those efforts have worked—13,000 women are planning to run for office.

I never dreamed I’d be one of them. 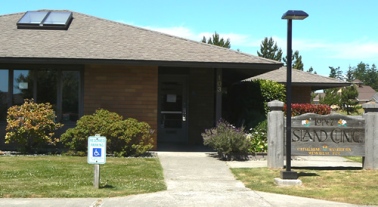 And then, in March, I learned that the rural health clinic in my community was in danger of closing. The hospital that the clinic had partnered with for nearly thirty years had decided to end the relationship, an action that would significantly decrease financial resources needed to keep it in operation. The nonprofit (Catherine Washburn Medical Association) that owns and maintains the clinic building and equipment went to work to find a solution and learned that if the voters approved creation of a Public Hospital District, the district could levy a property tax to help fund the clinic.

In Washington State, Public Hospital Districts are community-created, governmental entities authorized by state law to deliver health services. An elected Board of Commissioners governs such districts. Believing that the creation of a Public Hospital District was a sound and wise approach to preserve the outstanding health care available in my community, I wanted to do my part to assure that care continues. So, having recently retired from a forty-year nursing career, I threw my nurse’s cap into the ring to serve as one of five commissioners.

The first hurdle was to gain community approval of creation of the Public Hospital District. Clearly, I’m not the only one who values the clinic’s services. We needed 749 votes for the election to be valid, and then a simple majority of those votes for the measure to pass. The election result this week was stunning.

As an unopposed candidate, I was voted in. Four other commissioners were elected, too, and all of them bring the kind of expertise the district needs to assure that the tax money is spent appropriately. Once we’re sworn in, we’ll be hard at work to assure a smooth transition from the current partnership to a new structure.

I know that my candidacy for elected office won’t impact the dangerous and harmful repercussions of the Trump administration. But, it will affect my family, friends, and neighbors, and those are mighty good reasons to run.