This October, I once again became a Chicago Cubs fan. I like to think I’d always been one, starting in childhood in Chicago when I’d listen to Cubs games on the radio. After my family moved to Southern Illinois, my dad and I still cheered for the Cubs, watched their games on TV, read the sports pages, and every year hoped for a chance at the World Series—or at least a few wins.

In my mid-twenties, my dad died. By then I was living in Southern Indiana and occasionally went to minor league Evansville Triplets games at Bosse Field (third oldest ballpark after Wrigley Field and Fenway Park). A few years later, newly married, I moved to Seattle. Without my Cubs-cheering dad and so many miles from my birthplace, I turned my fading baseball interest to the Seattle Mariners. That eventually disappeared as I became disillusioned with professional sports’ shift from, well, sport to entertainment.

At dawn on an April morning this year, my husband and I helped move our son and daughter-in-law from Washington, DC to Chicago. We loaded their possessions into a rented truck and their compact car and took turns driving on the 700-mile trip. We pulled into their north side neighborhood around 8 pm. Once again I had family in Cubs territory. 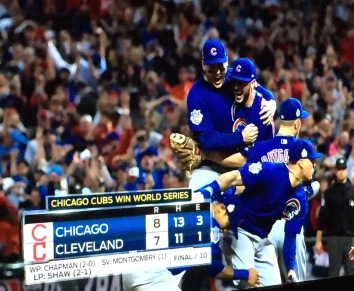 Throughout the spring, I noted the return of my hope about the Cubs – this might be the year, the first time since 1908, that they’d go to the World Series. My interest, and hope, grew all summer and into the fall, the playoffs, and finally the World Series. Call me a fair-weather fan, but the Cubs’ historic win restored my appreciation for baseball and my loyalty to my hometown team.

A World Series title for Chicago wasn’t the only thing I hoped for this fall. I had similar feelings about the 2016 election – hope for a more progressive agenda, hope for the first woman president, hope for a shift in Congress. Sadly, shockingly, by the time I went to bed on November 8, the only shift that seemed likely was toward environmental destruction, health care dismantling, violations of human rights, and military escalation. As the reality that my country had elected Donald Trump began to sink in, distress replaced hope. Right on its heels was the question, “What am I to do?” 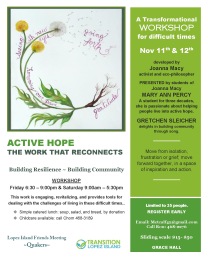 This wasn’t the first time I’d felt despair or had questions about my role. I’d sat with anguish about climate change for months, and finally registered for a workshop created by Joanna Macy, a scholar of Buddhism, systems theory, and deep ecology. Two of her students were offering “The Work That Reconnects,” November 11-12. The timing couldn’t have been better.

To prepare for the workshop, I’d started reading one of Macy’s books, Active Hope: How to Face the Mess We’re in without Going Crazy. The “mess” I was focused on was climate change, but the book’s introduction made it clear that Active Hope can apply to any situation.

The word hope has two different meanings. The first involves hopefulness, where our preferred outcome seems reasonably likely to happen. If we require this kind of hope before we commit ourselves to an action, our response gets blocked in areas where we don’t rate our chances too high.

Kind of like how I’d come to think about the Cubs, and, I have to admit, efforts to save the planet. For some time, my hope—in both cases—fluctuated based on how I rated the chances of “winning.” Macy describes the second meaning of hope as about desire—knowing what we hope for or would like to happen—and becoming an active participant in bringing about those desires.

Active Hope is a practice. Like tai chi or gardening, it is something we do rather than have… Rather than weighing our chances and proceeding only when we feel hopeful, we focus on our intention and let it be our guide.

During the workshop, we sang, we grieved, we raged, sang some more, and listened. One of the most transformative exercises for me was sitting in a circle for the Truth Mandala. The leader presented symbolic objects that we could take turns holding: a stone to express fear, dry leaves to represent sorrow, a stick for our anger, and an empty bowl to symbolize our hunger for what’s missing—our emptiness. And where was hope? The leader explained that the very ground of the mandala is hope.

I gripped the stick and spoke of my love for the power and beauty of words and my anger about ways they’re being misused to foster hate and distrust. Then I lifted the heavy rock and acknowledged my fear of speaking truth to power, of being misunderstood, of unwittingly hurting others, or of being perceived as naïve.

After each of us spoke, the rest of the group acknowledged us with the words, “We hear you.” At the end, the leader honored the truth each of us shared and pointed out that each object in the mandala was like a coin with two sides: the courage to speak our fear is evidence of trust; our sorrow is for those things we deeply care for; the anger springs from passion for justice; and to be empty means there’s space to be filled.

By the end of the day, I felt clarity about my question of what I’m to do. Rather than weighing my chances and proceeding only when I feel hopeful—like I did with the Cubs—now, my intention is to DO hope by listening and writing my truth. I don’t know yet what form that will take, but I intend for my words to come from a place of love, grounded in what my Quaker faith has shown me: there is something of the Light in everyone. No exceptions. And every time I feel afraid that I’ll be misunderstood, or viewed as gullible, I’ll remind myself that the other side of that coin is trust; that my anger springs from my passion for justice; my tears come from deep love; and my emptiness offers space for my words.