Skip to content
It’s become a Saturday ritual. We huddle inside a small building, our hats and gloves giving off that scent of damp wool, our chilled hands cupped around mugs of fresh-brewed coffee.  Thanks to our friends Sage and Nathan, soon we’ll be nibbling apple or pumpkin scones­—or maybe one of each—still warm from the couple’s wood-fired oven at Barn Bread Bakery. 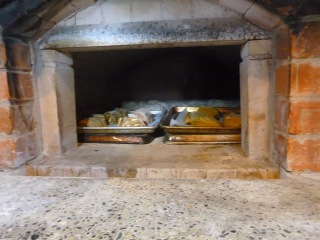 The caffeine and sweets fuel us to decide which of their artisan breads to buy. Will it be Pain de Campagne, Flax Sunflower, Raisin Coriander, the twisted baguettes called Tordus, or the naturally leavened gluten-free round? I savor the smells, have a mental debate about which variety to buy, and end up unable to settle on just one.

Sage and Nathan moved to Lopez Island, WA a couple of years ago from Berkeley, CA where Sage apprenticed with baker, Eduardo Morrell, at the Marin Headland Center for the Arts. Eduardo taught her to use simple ingredients and traditional techniques to make naturally leavened bread and baked goods and then bake them in a wood fired oven.  When Sage and Nathan arrived on Lopez, Sage continued to bake bread in a tiny home oven; within a few weeks she was baking more bread than she could give away to new friends, so she painted a sign and took her loaves to the Farmers’ Market. One customer, Ken, loved the bread and offered the use of his wood-fired brick oven.
After that first summer, the couple launched themselves wholeheartedly into a baking business and made hundreds of loaves of bread for Lopezians. The owner of the farm where they live in a converted granary offered them space on his land to build their own brick oven and bakery.  You can read more about that process and their successful Kickstarter campaign at Wood-fired Bakery on Midnight’s Farm. Oh, and along the way, Sage and Nathan gave birth to their daughter, Eden.
On Saturday mornings, Sage and Nathan make it look easy, but I know much happens behind the scenes.  Sage mixes dough, lets it rise, weighs it and shapes the balls into rustic loaves, often with Eden overseeing from her perch in a backpack.  A couple of hours before baking time, Nathan gets the wood fire going in the brick oven. He’s mastered the art and science of maintaining the right temperatures for whatever is baking. Conversation pauses every time Nathan slides the long-handled wooden paddle into the oven and pulls out scones, golden loaves of bread, or pizzas bubbling with melted cheese. 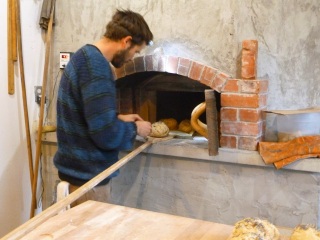 Pizza? Yes, after the scones and breads bake, Sage and Nathan weigh out more dough and shape it into pizza crust.  While you wait, they top it with organic tomato sauce and ingredients like kale, roasted peppers, mushrooms, onions, mozzarella, pepperoni, and sausage, and slide it into the oven. 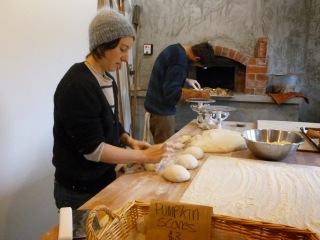 Condensation forms on the bakery windows as we linger, adding to the lore that’s already developing around this hand-crafted business.  Like the bicyclists who didn’t even make it to the end of the driveway before they turned back to get more scones. Or the locals who stop in early to get scones fresh out of the oven, then return at noon for pizza. And the unanimous opinion that sharing Saturday bread with neighbors is a ritual worth repeating. 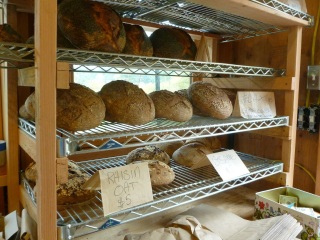