This year’s 4th of July celebrations stretched over an entire week on the rural island where I live. Many tourists from the mainland took advantage of a midweek day off from work and turned it into a vacation that reached across weekends on either side of the national holiday.

We crowded both sides of the street running through our village for the annual parade, this year dedicated to our local solid waste and recycling center.

People attended concerts, cookouts, and the Farmers Market; paddled and cycled, joined the Lions’ Club Fun Run/Walk, perused used books at the Friends of the Library sale, and lazed on the beaches.

Except for the annual community fireworks display at 10:30 PM, there was a noticeable (and blessed) absence of whistling and exploding firecrackers at private events. Evidently people responded to the dozens of reminders posted along island roadways that all personal fireworks are banned in our county.

I’ve long felt ambivalent about 4th of July festivities. Too often, much of the celebrating focuses on the use of violence and war to protect our “freedom;” nowhere is that more evident than rockets bursting in the air, often over fragile wildlife habitats and bodies of water. 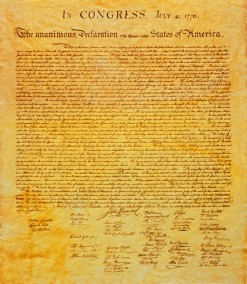 But this year, my emotions included grief. Ever since the vitriol of the 2016 Presidential race and the resulting election of Donald Trump, I’ve worked to manage the anger, fear, and sadness that shadow me. As I re-read the U.S. Declaration of Independence this week, I was struck by the explanation of the reason for this declaration:

“The history of the present King of Great Britain is a history of repeated injuries and usurpations, all having in direct object the establishment of an absolute tyranny over these States.”

That statement is followed by a long list of “facts” to prove that claim. Many of the examples resonate with actions of our current President, this one in particular:

“He has plundered our seas, ravaged our coasts, burnt our towns, and destroyed the lives of our people.”

So, yes, anger, fear, and sadness shadowed this year’s 4th of July for me.

A couple of days later, I received word from writing friend and teacher David Oates that one of his essays had been published in Terrain.org’s “Letter to America Series.” Through this collection, the online magazine presents “urgent, powerful, and beautiful post-election responses from writers, artists, scientists, and thinkers across the United States.” The series began on November 17 when Alison Hawthorne Deming published her Letter to America in response to the election. Her instructions about how to respond were clear: “Think of the great spirit of inventiveness the Earth calls forth after each major disturbance it suffers. Be artful, inventive, and just, my friends, but do not be silent.”

People have followed Deming’s instruction in the form of poems, photographs, traditional letters, and more. David’s response took the form of a condolence letter. As good sympathy notes do, David’s words consoled me—and reinforced Deming’s urging to not be silent. I recommend you read David’s entire essay; this especially spoke to me:

“Each of us wants his or her own way. But we are unhappy–lonely, abandoned, miserable–unless we are profoundly woven in with others. The tearfulness and sorrow of our present moment come from a feeling that in this dimension we have received a profound wound. And we’re all bleeding. David James Duncan calls it our civic grief.

Here we aim for possibility, a more perfect union. Here in our striving and imagining we know vulnerability, this heartbreak, this civic grief.

Let us miss it so fiercely that we become real again, re-inhabit our skins, our plazas and public places, our words that once rose above us like a phalanx of bright spearpoints. Let us grieve as long as necessary and remember as hard as we can.

Four years ago when David was guest faculty in my writing program, he became an example for me of how to overcome fear of speaking out through my writing. “Be grounded in your process as a writer so that your writing isn’t dependent on what others think.”

There’s much comfort and sustenance in the Terrain.org series, and it’s all just a click away. It’s another place I turn to remember the earth’s and our nation’s great spirit of inventiveness. It gives me strength to act.