The second Saturday of June comes close to being a Lopez Island holiday. That’s high school graduation day, and it’s a community event. This year was no exception, but the celebration was exceptional for at least five reasons. That’s the number of graduates in the Class of 2017, the smallest class in nearly fifty years.

Those five (and their families) organized the celebration, maintaining many of the ceremony’s traditions—and adding a few twists. 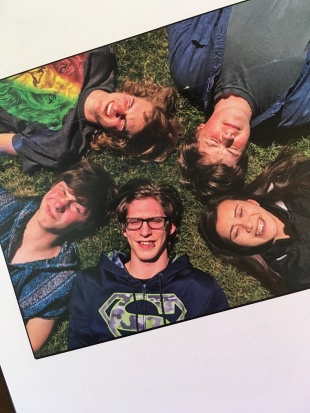 As usual, the students wore black caps and gowns as they entered the gymnasium. More than one mortarboard listed to the side as the graduates strolled through an arbor, a local bagpiper setting the pace. And as always, the audience remained standing through the Star Spangled Banner, this year played by one of the honorees on an electric guitar, Jimi Hendrix-style.

While there might be disadvantages to such a small class size, a number of benefits were evident. Instead of just one student speaker, all five addressed the crowd. Each of their short speeches included gratitude for feeling part of this community, whether they’d lived here since infancy or arrived in the past year or two. As one newcomer said, “I felt this was home.” One of the teachers spoke about each student as well, identifying their individual strengths and growth, as well as their commitment to question and understand. Two of them want to become carpenters, two plan to study engineering, and one hopes to work as an EMT or paramedic.

I sat near the back of the audience, watching family members nod their heads and smile, just as I had done seventeen years earlier for my own kids. I could tell that a man sitting in the front row was listening intently, jotting notes, and reveling in the celebration along with everyone else. The student who had written him to ask if he’d give the graduation address said, “Please welcome Governor Jay Inslee,” and the audience rose to their feet and applauded as he bounded up the steps of the stage.

Governor Inslee is no stranger to island communities; he’s from Bainbridge Island, and his father spent much time in his final years on Lopez. The governor expressed his pleasure at being invited and then made a claim that is hard to dispute. “Pound for pound, this is the best class in history,” he said.

Evidently, the governor likes making history. He did so recently when he joined the governors of California and New York to form the U.S. Climate Alliance to uphold the Paris Accord. As of June 7, twelve states and Puerto Rico have joined the alliance, and ten more governors plus the District of Columbia have expressed support. This Washingtonian appreciates Governor Inslee’s leadership on climate change and many other issues. From the cheers and whistles from the crowd, many of my fellow Lopezians do, too.

But he received the most thunderous applause for his follow-up to the historic nature of the small graduating class. He stood a little straighter at the podium and looked out to the crowd. “I’m the first governor in history,” he boomed, “to speak at a graduation wearing a shirt I picked out at the Take-It-Or-Leave-It, thirty-five minutes before the ceremony!” The crowd’s reaction made it clear everyone understood that the Washington governor had gone to our local recycling center at “the dump” to find the blue-and-white-checked shirt he wore under his navy blue suit jacket.

He showed further knowledge of the island when he spoke about waving to all cars, a practice that’s earned Lopez the title of “The Friendly Isle.” He urged the Class of 2017 to use that Friendly Isle awareness to go out to “create a Friendly World.”

The tone grew more serious, though, as the governor reminded us all, “This class faces a threat no other generation has.” He then offered a mini-lesson in what some call climate change’s equally evil twin—ocean acidification. The release of carbon dioxide from industrial and agricultural activities has changed seawater chemistry throughout the world. Inslee’s message included the sobering fact that over the past 200 years, the Salish Sea that surrounds our island has become 30% more acidic. According to the Smithsonian, that’s faster than any known change in ocean chemistry in the last 50 million years.

It will take more than wearing recycled clothes to restore the ocean’s chemical balance (though every effort helps). I suspect that these five graduates will be among those of their generation working to make the sea—and the world—more friendly. THAT will also make history.