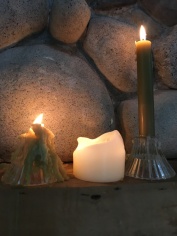 I feel compelled to write about the January 21 women’s marches even though I experienced them second-hand through stories and images. While hundreds of thousands of people around the world marched, I held them in my awareness at an annual Quaker silent retreat. As twenty-five of us gathered at Huston Retreat Center on the banks of the Skykomish River, many of us spoke of carrying the intention to hold space in the silence for the marchers. We burned candles in solidarity, and I wasn’t the only one who felt the presence of those in the streets. How can this be, in the silence of the woods, before the quiet crackle of a woodstove, in the act of cooking without speaking? That’s part of the mystery for me of the silence; I can’t explain it, but I know it to be true.

The retreat, a part of my spiritual cycle for nearly twenty-five years, was one of the few things that could have kept me from joining those who took to the roadways to stand for environmental justice, health care, and the rights of immigrants, people of color, LGBTQIA, and women. That’s where my heart is and those are the issues I’m committed to. There’s much work to do, and I’m grateful for the way the marches mobilized and energized people at the same time they sent a clear message that we’re not alone. 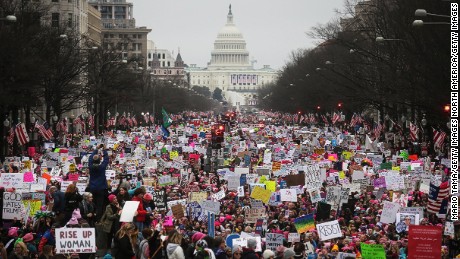 Part of the work is to realize that change happens slowly and at times will seem that it’s standing still, just like the pace at many marches as people tried to move forward along packed streets. At times, it also will feel that we’re being re-routed, as happened during at least one march when the planned course was overwhelmed by the massive turnout.

I’m learning about my particular path even as I take hesitant steps. Much like walking a labyrinth, I labor to proceed with trust, to let go of the fear of taking a wrong turn. You can’t in a labyrinth, but I can—and will—as I try new actions and roles.

Perhaps a mistake I made was to not march, but it doesn’t feel that way to me. It’s more apparent to me each day that there’s a long struggle ahead. Unlike the marathon I’ve never run, or the climb to the summit of Mt. Rainier I’ve never made, I’m in training for this challenge, strengthening muscles of resistance and compassion and grounding myself in the light and wisdom that is always present.

One thing the 2016 election taught me is that despite past efforts for justice, health care, the economy, and the environment, much as been ignored for many administrations. One thing Mr. Trump got right is that parts of our government are broken and have been for decades. I’ve denied that truth for far too long. But where this country’s new president and I (and obviously millions of others) diverge, is about what needs to be fixed and how. 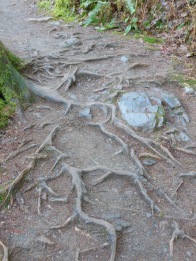 The Silent Retreat helped shore me up. In the woods and in the rustic cabins, metaphors abounded about the power of small actions—pencil-thin roots scrawling across the trail to support cedars stretched toward the sky; snowflakes collecting on peaks to

Last Monday I returned to my morning snatches of quiet reflection and composed a prayer poem (a “proem” as my writer friend Brian Doyle calls it), and I offer it to us all.

As we raise our voices in fury

and solidarity, let us open

our hearts and spread wide