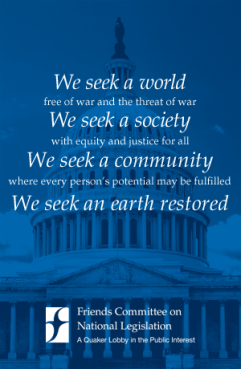 Picture this. Nearly 200 people gather to define federal legislative policies and priorities. They begin their meeting in silence—a quiet that lasts for ten, fifteen, perhaps twenty minutes. They likely will return to that silence, more than once, throughout their deliberations. Their goal might be to set a legislative agenda, but equally important is the process they follow to achieve it.

That process is what most excited Dorsey Green, a Quaker from Seattle, when she served on the governing committee with Friends Committee on National Legislation (FCNL). Dorsey explains that she cherishes Friends’ decision-making process in the recent QuakerSpeak Video, “Why Quakers Value Process Over Outcome.”

I’ve written about my view of Quaker decision-making (Decision Time) as, in the words of Eden Grace, “a sacramental encounter.” Dorsey adds to this conversation with her experience of the process during FCNL meetings.

“It’s radical to be more concerned with the process than outcome, especially in today’s culture,” Dorsey says, “but I trust—I completely trust—that if our processes is on, if we’re really looking for the God Way or God’s will for our group, we’re going to come to the right place.”

Radical indeed. That doesn’t mean that results aren’t important to FCNL; after all, the organization “… acts in faith to create a world free from war, a society with equity and justice for all, a community where every person’s potential may be fulfilled and an earth restored.” But the getting there—the acting in faith—is so different from what we witness in our results-driven society. Whether it’s in sports, sales, fitness, elections, even the arts, the focus (and value) usually is on the outcome, rather than the way the outcome was achieved.

FCNL describes its purpose is to “bring spiritual values to bear on public policy decisions. Through individual and corporate worship, we try to be open to the will of God and to express the spirit of Christ in all relationships and levels of interaction, whether personal, community, national or global.” Dorsey explains how that process is different from secular decision-making:

“…our job as Quakers is not to figure out, what does everybody think will work, it’s what we feel led to do as a group and what that means is we’re not doing a competitive voting system.”

What we’re led to do as a group. Barry Morley discusses this process in Pendle Hill Pamphlet 307 Beyond Consensus as opening “…ourselves to being guided; we turn the matter over, allowing Spirit/God/Light to show the way” and as “…a process that cares for the whole of the corporate body as well as individuals.”

Dorsey has seen what can happen when people open themselves to being guided in the way Morley describes: “… people go, ‘Oh. Right. That’s right.’ Even if no one thought of it before we walked in the room. And when you do it in a group as large as FCNL’s annual meeting …it’s like the whole room shimmers.”

I’ve seen—and felt—that shimmer too, in my own small Friends Meeting as well as in larger Quaker decision-making groups. It’s why I value this process the way Dorsey does. When we gather in thoughtful and respectful listening, open to guidance from whatever we call that Wisdom, that Presence, that Love—the sense of what we’re meant to do shines.