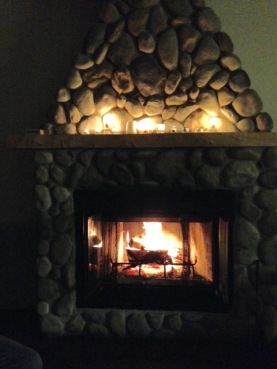 Last weekend found me again at the Quaker Silent Retreat I’ve attended almost every January since 1992. And, as usual, it was muddy and rainy at the forested Huston Retreat Center near Wallace Falls State Park. Woodstoves in the dorms dried damp socks, shoes, and jackets after hikes. Candles and flaring logs in the stone fireplace cast buttery light around the Long House where 27 of us gathered for meals and worship.

For most of us, even though we seek the silence for spiritual nourishment, remaining quiet and inward for forty hours is a challenge. Yet, we keep returning, and this retreat continues to thrive, now for somewhere in the neighborhood of 33 years. That longevity strikes me as warranting a written history, a task I felt called to begin two years ago. It’s a work-in-progress as I interview the two women who organized the first one (so far, I’ve been unable to pin down the date of that initial gathering), re-read the Common Journals that attenders write in during the retreats, survey current attenders, and send the staff at the Huston Center to their archives to answer questions about its history. At this year’s retreat, I shared a draft entitled Forty Hours of Silence: A History of Pacific Northwest Quarterly Meeting Silent Retreat, 1984-2015. Here are a few excerpts:

A longing for sustained silence compelled Kristi Rozdilsky in the early 1980s to propose to her University (Seattle, WA) Friends Meeting women’s group a silent weekend. She explains, “It just didn’t seem fair that you have to be a monk or a Buddhist in order to get a sustained period of silence where you can reach a depth to your worship and totally focus on your relationship with God.”

When there wasn’t enough interest in the small women’s group to organize a retreat and rent a venue, Kristi approached Pacific Northwest Quarterly Meeting (PNQM) in hopes of drawing from a larger number of Friends.

Kristi’s memories of the first retreat are dim. “I looked in my journals, but I did no reading or writing during silent retreat as a practice, so I can’t tell you anything specific. Except that everything went easy and sweet the way it does when the way opens.” Kristi’s reaction to realizing her dream of a silent weekend echoes the views of many who have attended over the years. “It’s so great not to have to talk with people, but to be close with them. Not to have to explain yourself. Not to have to follow someone else’s idea of what will nurture your spirit at that exact point in time.”

The retreat remains “easy and sweet,” even as it’s become a bit more organized.

Every fall, the Silent Retreat conveners send a call throughout the Quarterly Meeting to register for the gathering, typically scheduled on a weekend near the end of January. Current invitations describe the retreat this way:

This retreat offers an opportunity to reach more profound depths in the Silence of Quaker worship. The weekend is not a retreat in the sense of turning away from life. It is a temporary intentional community where we seek communion with the Holy Spirit, the world around us, and each other. With God’s help, we may be led to new priorities and insight for our lives. We may reach a deeper communion with our authentic selves, our spiritual community, and with the Divine.

Numbers of registrants range from 20 to 40. They come from meetings or worship groups on islands and inland from Port Townsend, WA to Sand Point, ID, and from Bellingham to Olympia. Often, a few isolated Friends without worshipping communities attend, and sometimes there are attenders who are friends of Friends for whom this is a new experience of Quakerism. Children willing to accept the discipline of silence are welcome, and several have attended over the years.

The Common Journals reflect a range of experiences, perceptions, and reflections about the silence. For some, remaining silent is stressful.

“I’m beginning to get over the panic of not being able to talk with all these people around me, and relax into trust that I don’t have to explain, direct, or do things exactly right.”

Many use the words fed, filled, and nourished, literally as well as figuratively, to describe their experiences. For some, it’s the river, moss, and ferns that feed and inspire. Others are filled by the mist of Wallace Falls, the crackling and dancing flames of the fire, or the wind.

“We have had the ministry of wind strongly throughout this retreat… Perhaps it helps awaken us to weather, the song of the earth, to feeling the invisible, the very air itself. Perhaps it helps strengthen our gratitude and tenderness toward each other as we feel the shelter our silence somehow creates for us.”

At the rise of Sunday morning Meeting for Worship, the group breaks the Silence, with participants typically sharing reflections on the weekend. This comment reflects the experience of many Silent Retreat attenders: “I had wondered whether 40 hours of silence would be too much—now it seems not enough.”

In 2015, the gathering experimented with the option of returning to silence after lunch on Sunday and continuing the retreat through lunch on Monday. The extension was offered again this year, and I was among the five who stayed on. My final journal entry describes my reaction to the additional 22 hours of quiet:

“It’s even harder to leave this time and place after an extra day. I want more of this quiet, this rhythm, this attentiveness to the clouds, the firs, the crackling fire, every morsel I consume, every pair of eyes and hands I encounter.” 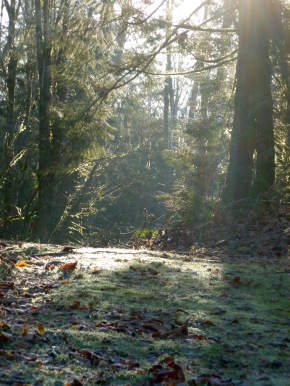 Next year, I expect I’ll sign up for “Sixty-two Hours of Silence.”