Author Kelly Davio offered good advice on her blog for beating the post conference blues following the Pacific Northwest Writers Association 2015 Summer Conference.  I acted on Kelly’s guidance by connecting through social media with several writers I met there and by reviewing my notes and organizing them for future reference. And Kelly’s post conference suggestions remind me of  the importance of preparation prior to such events, too. 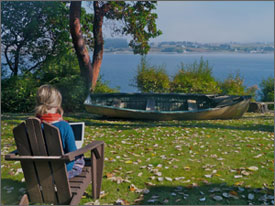 In my January 2013 blog post, “Preparation,” I described my routines before heading to my public health nursing job, entering Quaker worship, and beginning my daily writing. This week I’m recalling the benefits of advance focus as I plan for the upcoming Residency of my alma mater, Whidbey Writers Workshop Master of Fine Arts (MFA) program.

Now a Whidbey alum, I’m not enrolled in any of the MFA courses that current students will attend in the morning. So I’ll devote those hours to my own writing, and I’ll follow Kelly’s post-conference advice to “try something new.”  She wrote:

That new craft pointer you heard about in a workshop? Take it out for a spin.

I’ll try out some of the tips I learned in Kelly’s PNWA workshop, “What Prose Writers Can Learn from Poetry,” as I work on BOUNTY – Lopez Island Farmers, Food, and Community.

Perhaps the 300-word profiles I’ll be drafting to accompany nearly thirty photographs of farms and farmers will take the form of prose poems.

And when I turn to editing my memoir manuscript, Hiking Naked – A Quaker Woman’s Search for Balance, I’ll refer to notes from other sessions I attended such as “The Top Seven Manuscript Pitfalls” by Jason Black and “The Five Stages of Editing” by A. C. Fuller.

The most challenging part of my residency preparation, though, is deciding which afternoon sessions to attend; like any good conference, the residency schedule has me wishing I could be two (or more) places at once. Here are the topics and guest faculty I have my eye on:

And at the end of what promises to be a stimulating two weeks, I’ll have Kelly’s remedies to turn to if I suffer from post-residency blues.