We all yearn to feel wanted. Many of us receive that message from family, friends, work, and organizations—spiritual and otherwise. Some, though, only experience that sense in the form of WANTED posters that hang in post offices and courthouses or show up on Crime Stoppers websites. And those are the people whose stories Chris Hoke tells in his first book, WANTED – A Spiritual Pursuit Through Jails, Among Outlaws, and Across Borders.

I met Chris in February at the Search for Meaning Book Festival at Seattle University. He’s part of Tierra Nueva (New Earth), a Christian ministry based in Burlington, Washington, that serves “people on the margins (immigrants, inmates, ex-offenders, the homeless) and mainstream people.” His book had come out just three weeks earlier, and, just as he did in his writing, he spoke only a little about himself and much more about the men he works with as a gang pastor, jail chaplain, and co-founder of Underground Coffee.

WANTED has been described, aptly, as “a mix of true crime and spiritual adventure.” In it, Chris writes about bringing the teachings of Jesus into his daily experiences and encounters with gang members, men addicted to drugs, and “outlaws” like Ricardo (Richard) Mejia. Chris weaves Richard’s story through the book in chapters titled “WANTED.” Here’s how “WANTED I” begins:

Someone called the cops on Ricardo Mejia as soon as he was born. As soon as his fifteen-year-old mother had finished ridding him from her body, she slipped out of the Skagit Valley Hospital and left him there. When the nurse came in and saw the squirming newborn on his own in the clear plastic bin, she made no move to pick him up or cradle him. Instead, she picked up the phone and called the police.

Throughout the book, Chris reveals the story of the unlikely friendship that developed between him and Richard and of how they taught and learned from each other. In other chapters, Chris writes about many other men and of their gangs and crimes and of a world that I can’t imagine. The mini-lessons from bible studies Chris and inmates led put me back in touch with the teachings of Jesus and his example of love for the unwanted in the world.

Essayist and novelist Brian Doyle describes Chris’s storytelling well: “I never read a book so tender with its ears and so honest with its tongue.” This honesty and humility is present throughout the book as Chris also weaves in the story of his own faith journey. He writes that ever since his teens in suburban Southern California, when he “came most alive” in the late night, he’s been drawn to the kind of awareness that monastics encounter in the pre-dawn hours. “Maybe we were just coming at it from different sides of the clock,” Chris says. He divulges his own dark times and admits that the crimes he hears about from the men he meets in jail don’t alarm him—“to threaten, steal, destroy, cheat, evade, rage, attack, smother, and self-medicate are all impulses I recognize in myself.”

Chris’s stories make me think of my own reactions—compassion, often mixed with anger and frustration—toward the women I used to visit as a public health nurse. Some of them were the wives, girlfriends, sisters, or daughters of men like those Chris works with. I realized as I read Chris’s book how little I understood of their lives and of the broken systems that pushed them toward all the wrong places in search of feeling wanted. 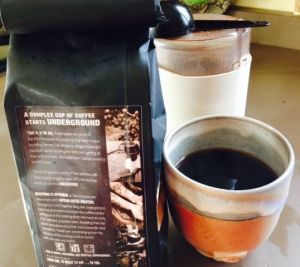 A package of Underground Coffee fresh-roasted beans arrived at my door the other day. As I sip a cup of the rich brew, I reflect on a leading I’ve felt for a while to work with women in prison. I have a lot to learn about how to do that, but Chris’s experience reminds me of one essential skill—listening—which we Quakers feel easier with than many people. I don’t know if the way will open for me to put that to use in a prison, but Chris’s stories about Richard Mejia and the other men he serves as pastor show me the power of listening for that of God in everyone.

Heeere’s Booker! He joined our family a couple weeks ago by adoption. Sixty pounds of love, face licks, and companionship. The Naked Hiker and I are quite taken with this 2-year-old lab/ Siberian husky. Read his story on today’s blog post, irisgraville.com.
Listen b
Dawn of a new day. A new era.
This happened today! I’ll be volunteering at the pharmacy when they begin vaccinations, so I was able to receive my first dose today. San Juan County Health Dept., Lopez Senior Services, and Lopez Fire District made a super team! I hardly felt the poke; 5 hours later and feeling fine. How I hope everyone who can receives the COVID vaccine when it’s your turn. Thank you to all who are getting it to us.