When I was in elementary school, I often felt the sting of being left out, of knowing that kids were laughing at me, or overhearing comments about my weight or clothes. I also witnessed hurtful behaviors toward other kids, such as embarrassing them in public, spreading rumors, and making inappropriate sexual comments.

We now refer to this as bullying, defined by the Centers for Disease Control and Prevention (CDC) as “unwanted, aggressive behavior among school-aged children that involves a real or perceived power imbalance.” Even though most people no longer accept bullying as a childhood rite of passage, it continues at alarming rates. The National Center for Educational Statistics claims that close to 30% of kids reported being bullied in 2013. And the CDC reports that the bullied, and the bullyiers, may suffer serious, lasting problems.

Fortunately, parents, teachers, and policy-makers are working together to stop and prevent bullying. Here are just a few that offer resources and support:

Now, there’s another resource: B in the World, a new chapter book for children ages 5 and older. Author Sharon Mentyka and illustrator Stephen Schlott offer an open-hearted, kids-eyed view of what it means to be “different” through the story of a boy who some days feels like wearing overalls and a flannel shirt and on others wakes up wishing he could dress like his sister. The book celebrates children for who they are meant to be, not how others want to label them; its characters and message captured my heart.

Sharon is a fellow Whidbey Writers Workshop MFA alum. She graciously accepted my request to participate in some Q and A about B.

Iris: Sharon, your writing explores themes of fairness (or unfairness), transitions, and powerlessness. Why do you write what you do and for the audience you do?

Sharon: I was raised in a family where young voices were not only discouraged, but silenced, so when I began writing, I chose to write stories for children and teens with what I hope is a generosity of spirit and open honesty. I think we undervalue teens and preteens in our society. It’s such a receptive age, if we let them speak, and if we listen.

I’m interested in creating characters who ask questions young people need to have answered: Can I be accepted for who I am? Can a serious wrong be forgiven if the truth it uncovers brings pain along with it? Why was I born “me” instead of you? Exploring these questions on a public and personal level feels natural to me.

Iris: What was the most challenging part of writing and publishing B in the World?

Sharon: Some of the challenges B faces are gender-related; others are just kid-related. Probably the most challenging decision I needed to make was how openly I would present B’s gender-fluid nature. I didn’t want to be too timid, because creating a male character who’s in touch with his female side was a real goal I had for this story. I wanted children who might identify with B to finally see themselves in a story.

Iris: What was most fun about writing and publishing B in the World?

Sharon: I made a ton of new friends! Many, many people helped bring B into the world. So many different groups—schools, libraries, writers, GLBTQ communities—welcomed the book with open arms. The entire process was a huge learning experience, but almost every minute of it was fun.

Iris: You read parts of your book to kids as you were working on it. What was that experience like?

Sharon: It was invaluable, and something that I try to do with all my stories. My goal isn’t to test the story idea so much—that’s what my writing critique group is for—but the kids are a reality check for me in other ways. Are the characters authentic? Is the language and voice right for this age group? For B, I read early drafts to several groups of second- and third-graders at a Seattle elementary school and also at a tutoring center where I volunteer. Kids this age have no problem telling you whether they like or dislike characters, or if situations in the story ring true. When I finish reading a chapter, if they moan and groan and ask me to read more, then I know I’m on the right track.

Iris: What do you hope kids and adults will gain from B in the World?

Sharon: I hope it encourages parents and children to talk. It’s a great way for families to initiate topics that sometimes feel awkward for them to bring up with their children at an early age, but that they know children are thinking about—bullying, gender differences, fairness. Talking about these things early can only be good. And because of the age group that this book targets (4-7 years), it’s a bridge book that can stay on a child’s bookshelf for a long time. Parents may start by reading it to children at age 4 or 5, and then the children will read it themselves in a few years.

Iris: What are you working on now?

Sharon: I’m in the final revision stages of two middle-grade novels for kids 10-14. One explores a town’s history of racism, told through the parallel voices of two young girls, one white and the other black, over the span of thirty years. The other tries to make sense of loss and abandonment as it follows a pod of orcas trapped in an enclosed inlet in the Pacific Northwest.

I’m also in the beginning stages of a graphic novel for young readers, told through a blended photographic-illustration style, that explores how a 12-year old boy turns to art as a tool in the process of healing a crisis in the life of his family. (You can learn more about Sharon’s writing projects at www.sharonmentyka.com).

Iris: What are you reading now?

Sharon: As a children’s writer, I have to keep two reading lists going simultaneously. On the kids’ side, I just finished Brown Girl Dreaming, Jacqueline Woodson’s verse memoir. I’m in the middle of Under the Egg, by Laura Marx Fitzgerald, a rich story that uses an art mystery to tackle poverty and the gap between the rich and poor. I also just enjoyed a great picture book biography of Jane Goodall called Me…Jane by Patrick McDonnell.

On my adult list, I’m reading Run by Ann Patchett, and I just finished Americanah by Chimamandah Ngozi Adichi. My current nonfiction reads are After Visiting Friends by Michael Hainey and Prince of Los Cocuyos, Richard Blanco’s memoir of growing up in Florida. 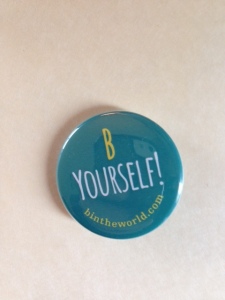 Thanks, Sharon. Now I have some new titles to add to my reading list, a new one to recommend (ask your local bookseller to stock B in the World), and a cool button to remind everyone of B’s important message.