Skip to content
At this time of the year, I have lots of opportunity to interact with visitors to my community on Lopez Island, WA.  Many of them are on vacation, and our local economy relies heavily on them. Those of us who live here year-round aren’t on vacation, and for most of us, this is the busiest, least vacation-like time of the year.  This week, my husband and I took some time off, though, to visit our daughter in California.  Here’s a glimpse of our visit; since I’m on vacation, I’ll let the photos tell the story. 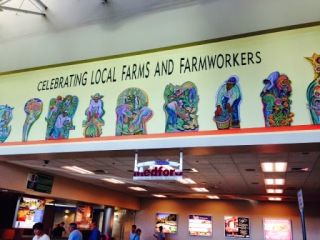 Our daughter works for Belcampo, a farm-to-fork organic meat production company. She spends most of her time at the company’s headquarters in Oakland, but during our visit we were to stop in at the farm near Mt. Shasta.

We flew into Medford, OR and were delighted to be greeted with this mural by Betty LaDuke. 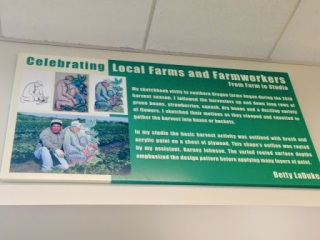 The explanation of the project reminds me of what we hope to accomplish with BOUNTY – Lopez Island Farmers, Food, and Community. 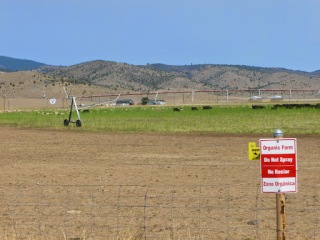 Belcampo’s commitment to act as good stewards of the land is the foundation of all of their operations. We were happy to see this sign where cattle, sheep, and goats were grazing. 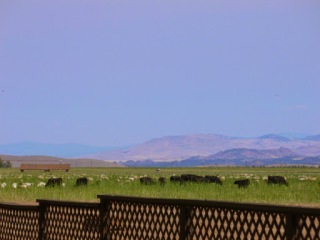 They seemed pretty happy about it, too.

We were able to do a bit of sightseeing on the weekend, starting with a performance of The Two Gentlemen of Verona at the Oregon Shakespeare Festival. 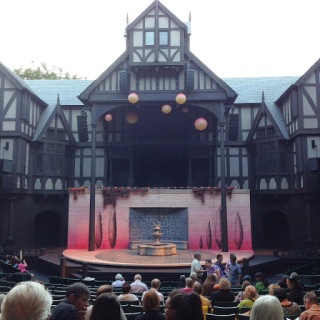 The Festival in Ashland, OR has been on my list for a long time, and I wasn’t disappointed – that one show whetted my appetite, and I hope we can take in more next year.

Did I mention that my daughter is a fantastic
cook?  She treated us to delicious meals, including hearty breakfasts like this one before we set off on a hike. 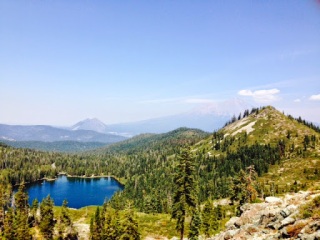 Fires in the area blocked views of Mt. Shasta most of the days of our visit, but the skies cleared a bit for our hike up from Castle Lake (that’s Mt. Shasta in the distance – at 14,179 feet it’s the second highest peak – after Rainier – in the Cascade Range). Don’t think I’ll be trying to reach that summit; this viewpoint was reward enough.
We head home tomorrow, returning to another beautiful spot and carrying that feeling of Vacation Time in my suitcase.

Always a thrill to receive a good review. This one arrived 3 years after Hiking Naked was launched! Thanks @reviewthisreviews. Also helps to have the appropriate beverage to celebrate the 4th anniversary of the book. Haven’t read it yet? It’s available wherever books are sold. I’m looking forward to reviewing a bunch of new books coming out soon. Read about them in today’s blog at irisgraville.com.
Here’s what I was getting ready for 4 years ago. Right before the baptism and the Senior Lunch, I launched #hikingnaked on #lopezisland. So many fond memories of the book’s warm reception by my community. Thanks @homebound.publications for keeping the memoir in print and @lopezbookshop for keeping it on the shelves. Still available wherever books are sold.
Celebration! @kipgreenthal and I toasted @spiralleadership last night at @vitaswildlydelicious in honor of Ab's selection as a finalist in the @homebound.publications 2021 Poetry Contest! That means Ab's collection, "Walk Deep," will be published by the press next year. I'm looking forward to reading Ab's book as well as that of the Poetry Prize winner, @samdva. Yep, we closed the place down! Thanks for letting us stick around, @bruce.botts.
You may not have noticed the surprise I hid in yesterday’s blog post, “Sharing Stories During Dark Times.” If you click on the hyperlinks I often include in my essays, the one in the third paragraph would have led you to an important announcement about my forthcoming book, Writer in a Life Vest.