Skip to content
These days, it’s warm enough to keep our bedroom door open at night. The rising sun wakes me just after 5 AM, and soon after, the hum of a ferryboat lulls me back to slumber. Two days a week, though, I have to resist the soothing thrum of the vessel carrying passengers from the mainland so that I can join other Lopez commuters who work on neighboring islands. For the last five years, I’ve been among them, leaving Lopez shortly before 7 AM for the half hour sailing to Orcas Island and my job as a school nurse. (see Nov. 2010 post Ferry Boat Meditation).
Lately, my commute has been the stuff of Hollywood movie sets. We’ve had a painter’s dream of clear skies and crystalline blue water, contrasting with the jewel-like greens of the shore. 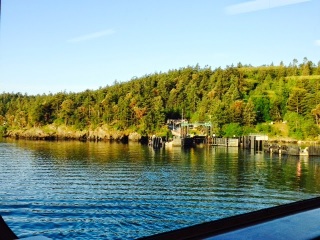 At the Orcas Landing, the red roofs of the market and the 110-year old Orcas Hotel welcome our arrival.

As I sip coffee from my travel mug, I chide myself for wanting to sleep in; I know I’d receive no sympathy from commuters on car-clogged freeways.
Today was the last day of my commute—not just for the school year, but forever. After forty years as a nurse, I’m retiring. Or, as I prefer to describe my departure, refocusing. I’ve thought of this day often, especially in the winter months when I’d rise, get dressed, and drive to the ferry landing in the dark. Those mornings I’d have preferred to succumb to the ferry engine rumble and tunnel under the comforter for another hour of sleep. 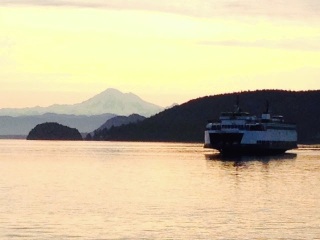 Some days, though, I’d be rewarded for not hitting the snooze button, making it to the landing just in time to see the ferry approach the dock, the sunrise glinting off Mt. Baker’s peak. 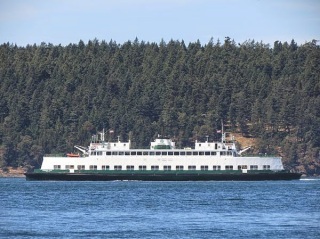 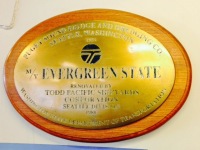 Now I’ve learned that the M/V Evergreen State, the ferry that has carried me to my job on Orcas, is retiring, too. Or, in ship lingo, is being decommissioned. The Evergreen State was the first vessel custom built for Washington State Ferries in 1954.
It will make its final run on the interisland route this Friday afternoon; if I were more sentimental—and didn’t have another commitment—I’d make an extra trip to Orcas just to say farewell to this vessel that’s one year younger than I am.
M/V Evergreen State will be replaced by M/V Klahowya to carry passengers and vehicles on the interisland route through the San Juans. The boat’s name comes from a Chinook Indian term for “greetings.” I suspect I’ll spend some time on this vessel; I learned during my commutes that the ferry is a good place to write. Perhaps in the coming years, some of my “greetings” to you will have their beginnings on the Klahowya.But next week, I plan to just listen for the sound of its engine from my bed.
Do you commute to work? I’d love to hear your commuting stories—whether they’re current or from the days before you were “decommissioned.”